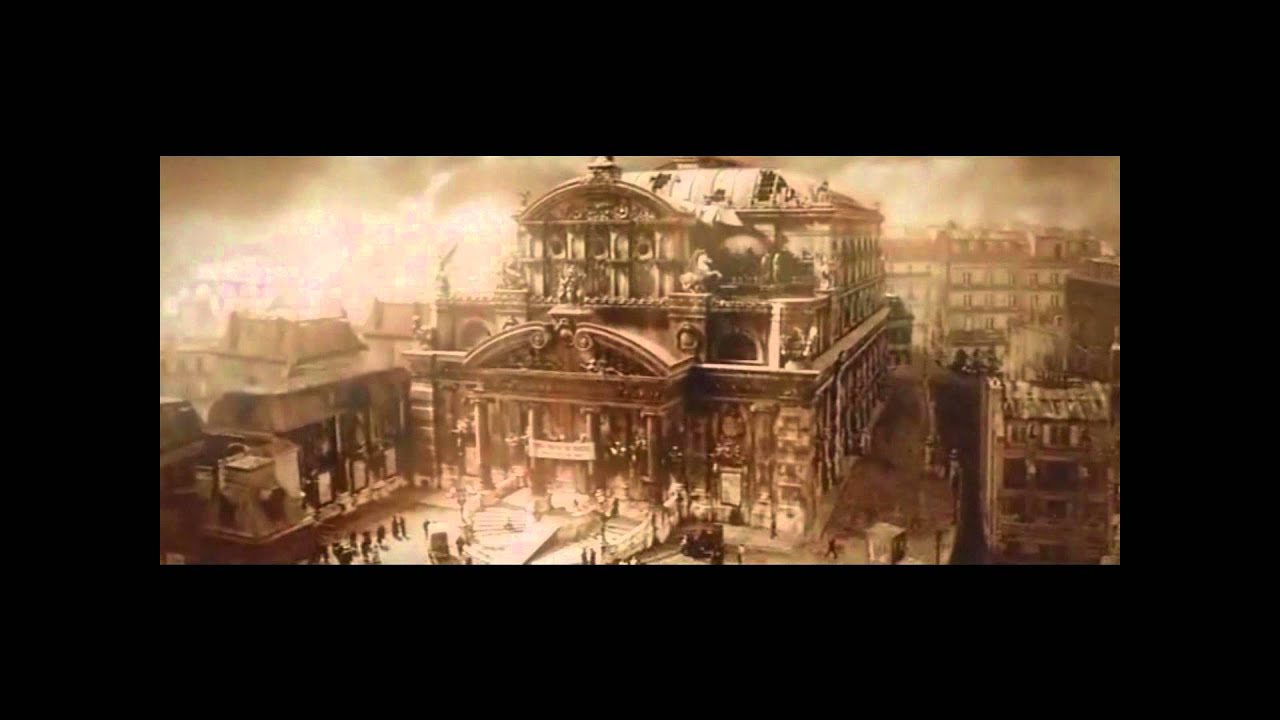 The Paris Opera House was built many, many years ago, during a golden age of prosperity in one of the countries located on the continent of Rupee. It was a grand construction, the pride of the city of Paris, extraordinaire and beautiful, a home for arts of all kinds. Several Opera Halls, painting studios, art gallery exhibits, a massive giant of a building, made for all to flock to. It was highly successful, for the first years. But the giant nature of the building took a toll and it eventually went out of business due to a combination of high pricing and a lack of maintenance, before the great wars.

After the wars, the Opera House was reopened, and became the base for a group called the Meeting


The Paris Opera House was built many years ago and was a very successful theater on Booga, located in the Desolate Lands not too far from the Crescent Hunter Guild, eventually closing down thanks to a lack of upkeep on the place and a mysterious phantom scaring off most of the producers and customers. After time passed a Solarian hero vanquished the phantom and took up his mask, while covertly establishing an organization within the hidden chambers of the opera house, the Meeting of the Dark.

The Meeting of the Dark was created as a small council of dark empowered heroes willing to take the blame of things and take on missions to preserve the name of heroes, making sure there would always be hope. Though their methods and personal have changed, the mission remains the same.

In response to growing threats around Booga, the Meeting reorganized. No longer a paranormal investigation council, the Meeting has taken upon itself to identity, investigate, and destroy major threats as an independent paramilitary organization. Armed with a small army of mercenaries and operatives as strike forces, enhanced by the presence of Operatives and field agents, provided with a fleet of vans that can slip through shadows to move faster across Booga, the Meeting has the raw force to fight a shadow war against any target. Not only that, but their research and development teams mean they can study and counter whatever target they're after, rebuilding their arsenal to kill it.

The Meeting is separated into multiple ranks akin to a ladder. The highest rung is the Leader. They are the final authority on all Meeting business, and act as a director of sorts. The second highest is the Co-Leader. They act as the leader when the above is missing, and are the leader's right hand man. The primary rung is the Operatives, who form the actual core of the Meeting. They are the ones who preform the majority of the Meeting's actions, and vote to appoint the leader. Below the Operatives are the field agents, who report to the Meeting what they see and hear regarding any targets the Meeting might wish to eliminate. The second lowest rung is the Mercenary Captain, who lead groups of mercenaries into battle. The lowest is the hired soldiers of the mercenaries, who serve as brute force and strike team soldiers intended to aid Operatives.


Meeting Members
Leader: The Dark Gunner
Co-Leader: Vincent
Operations Group Director:
Chief of Research:
Chief of Engineering:
Operatives: Azura, Constantine
Joining the Meeting involves either presenting an invitation to a mercenary of the Meeting, or asking to join from one. From there the Operatives discuss the new recruit. Operatives are the only thing in demand, for the field agents and mercs are easily bought. The Meeting is always ready to outsource if the needs arises.

The public area is the entrance, the ticket and concession lounge, the main theater seating, and to those willing to pay all but box 8 for private seating. Mercs guard the entrance to both the building and the private boxes as mostly excuses to get paid.

The off public back stage area is where both preparation for the play is held, and various Meeting business. Medical bays, training rooms, shooting yards, and sleeping quarters for the mercs are here. Coffers of money, discarded weapons, magical artifacts, and other spoils of victory are held in storage rooms here. All well guarded mind you.

Within the back stage areas includes three major areas. Scientific research labs staffed by pratical people and by dark aligned mages to detect whatever is brought before them, to reverse engineer any magic or genetic mutation. Next to it is the manufactoring bays, capable of producing anything they can afford for the Meeting. Lastly there's a collection of prison cells also located here, to keep any dangerous threats locked away, and open to interrogation.

Underneath the Opera House is a massive chasm with it's own small lake, which possesses an island that serves as the Meeting's true headquarters, only accessible by dark aligned powers calling forth a boat. On the island is a house full of rooms for the operative so, including places to sort current investigations and planned actions, quarters to house members needing to lay low and protected for a while. The main room has a computer that stores all Meeting data ever obtained, and thus is kept under tight lock and key. While traditionally a Meeting is a small council which keeps no records, this one does for knowing a threat on Booga will inevitable resurface.


The Solarian said:
After the defeat of the Reliquary of the Damned inside the Opera House, Meeting members received a vision of a robed burning figure, identified as a Solarian. After Jacen Petronov freed Sylvanas from the our imprisonment, the figure reappeared again saying Jacen will not be harmed. After consulting with the local Withereds, the Solarians have agreed to share all the information they had. A conference has been had with the Heroes Organization, who have agreed to recognize the threat, and get ready. Currently the Meeting is working to secure anti-magic arms and armors, and refining tracking of the Solarian.
Click to expand...

The Necromancer said:
A powerful Mage and undead servant are wandering the lands, causing trouble and sometimes wreaking havoc. After a successful capture of his servant Sylvanas in Port Garham, she was imprisoned in the Opera House. A week later Jacen and two magic wielding allies broke in and freed her, killing a significant number of the merc guards. While we are repairing the Opera House a bounty has been placed on Jacen's head. He has continued his rampage across the Desolate Lands, but has managed to start covering his tracks better, leaving us forced to compare murder scenes and test for his handy work. As such, a lot more murders have become less solid evidence against him.
Click to expand...

(Recap of the adventure from the previous thread. Magiana and Aquario of the Sisterhood of White Magic have come to the Paris Opera House under deception by Jacen in order to free Sylvanas from the Meeting of the Dark's captivity. Aquario has put the audience of a show under a sleeping mist in order to let him and Magiana seek out Sylvanas while Jacen makes his bold rescue within the back stages.)

The actors from the stage had run off to seek cover while the guards noticed the mages in the area.

"You! We must get you to safety!" They called.
"To the Ends of the Earth."

"Magiana, hurry and find the girl while I try to keep those two busy." Aquario whispered to the girl. He turned to the guards casually walked away from his seat and held his wand defensively to the guards. He had to be careful as to not hurt any innocent audience members. He fixed his glasses before glaring intimidatingly to the guards.

"We are here to carry someone to safety." He said sternly. "Please allow us to do our jobs or I will have no choice but to hold you back."

"Right!" Magiana whispered back obediently, pushing herself onto the front stage using her hands first and running through the curtains as fast as her feet would allow. "Now to find her..."

"What are you talking about, it's our job to carry someone to safety, you are the one who needs protecting, the Opera House is under attack!" The guards replied moving to him. "Quickly to the back stages!"

The stage was deserted, but there were pathways leading behind.
"To the Ends of the Earth."

Magiana broke into a sprint and went down one of the pathways. "Jacen?! Miss?" She whispered hurriedly as she ran.

"Well.. I was the one who put everyone to sleep." Aquario said calmly. He knew that his words could spark an argument so he kept his guard up. "But please, we are only here for a mission. Allow us to capture the hostage and we will leave peacefully."

Aquario glanced at Magiana, wondering if she found the hostage. He turned back to the guards with his hand at hand. "But please don't mind us. We will leave here as soon as we find the hostage."

The guards assumed a hostile expression and aimed rifles at Aquario.

"Sir put down any weapons or tools on you, do not attempt any spellcraft, or we will shoot. No one is being taken for hostage today." They said calmly but with rightouesness.

Magiana would see guards and actors retreating down the stone corridor.

"Keep running!" A guard yelled.
"Keep us safe!" An actor replied.
"To the Ends of the Earth."

"Agreed." Aquario replied. "I do believe you are unaware of the illegal actions being performed or held within this vicinity, yes?"

He listened to the guards, hopefully enough to buy Magiana some time. Of course, he never really put his wand down, he just pointed it to the floor, away from them.

"We were sent here to get someone and return her to safety. I am not here to hurt anyone."

"Mister Jacen, where are you?" Magiana hissed among the voices. She couldn't tell where he could be at all. Her shoes made clacking noises against the floor.