The Realm of Absolute Destruction... or just the Realm of Mylinta, if you prefer. It had aspects of all the seven demon realms, but at the exact center of the dimension is a tower of Black Obsidian where Mylinta, Primordial Goddess of Destruction and Punishment lives and punishes the most evil souls in the universe. Today is where a great battle would be fought... and where one of its combatants lived. 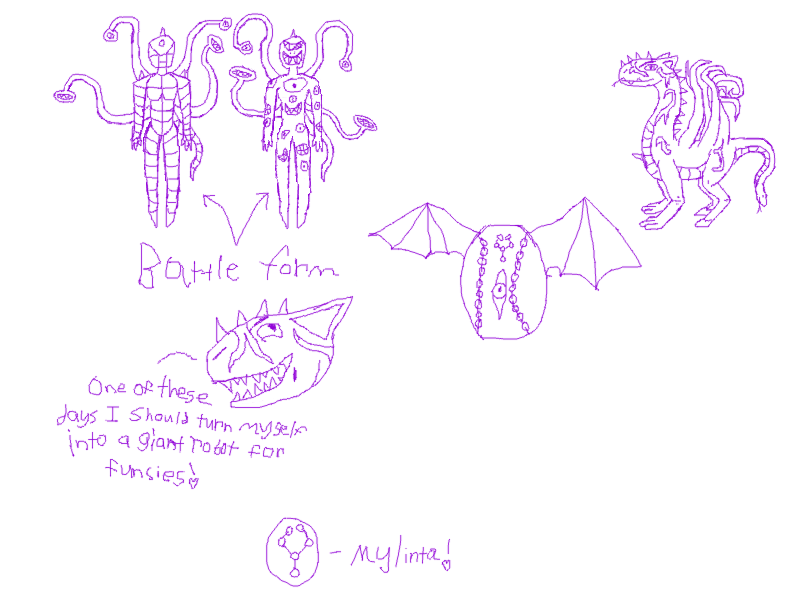 As a primordial, Mylinta's power knows few equals and only one superior. Mylinta's true body is the size of a planet, but she projects a solid illusion called a false body that she uses to channel her powers, save energy, and more efficiently travel. Mylinta has a huge variety of powers and abilities, all the better to destroy shit with. As a primordial, she has the power to create or destroy just about anything nearly instantly- she simply prefers to destroy. Her False body can shape shift, though it usually appears as the four-legged being above.

Divine Punishment attacks: Flames of Wrath (breathes 10,000,000,000-kelvin flames that scorch the very soul), Fog of Lust (summons a pink cloud that encourages foes to make love, not war), Crystalline Greed (fires a million razor-sharp, teal crystals to cut enemies to ribbons), Sandstorm of Gluttony (Pretty self-explanatory), Envious tide (Blasts water at insane pressure- more than enough pressure to drill through steel), Blade of pride (Summons a sword that she uses to attack.), Haze of Sloth (drains an enemy of health and motivation, also healing her in the process), Great Absolution (Combines all 7 of the previous into a black beam)

Destructor attacks: Tentacle lash, Stomp, Bite, punches and kicks (Battle form),  Nuclear breath, Destructor beam (A very precise attack akin to Frieza's death beam), Obsidian blade (summons a sword made of obsidian- not as powerful as a blade of pride, but she's more likely to use multiples), Molecular disruption (Attacks the very molecules that make up an object, shattering them.)

Other abilities: She can create and command demons of her universe, as well as cause any number of natural disasters- she simply doesn't do so in battle... not that she fights often.

Anything else you should know? She's a sadist and doesn't usually like to use her strongest attacks and powers since that would just be boring. She's has a bit of all of the 7 deadly sins in her to some extent, but is surprisingly not necessarily evil herself... at all. Rather, she simply keeps the universe in flux, helping her sister (Milira, goddess of creation) maintain the cycle of Rebirth. She'll also be in combat form for most of this battle.
From the the Sevaza System, Planet Nafine! Just who the heck do you think I am?! I'm Alzoru Ledura, the Coral Lindworm!

"I heard you punish sins. I'm here to change that." His core started to glow a bright red as he powered up, charging a couple of demonic blasts.

"Oh... I sense in you much evil indeed..." She sounded like a demonic chain smoker, "I am Mylinta, Primordial Goddess of Destruction..." She shifted to her battle form, "And you have made a horrible mistake." She summoned a sword of obsidian into her hand and chuckled. She gave him a terrifying grin... "I'm going to enjoy punishing you, you naughty boy." She motioned for him to bring it on, not one to start a fight.
From the the Sevaza System, Planet Nafine! Just who the heck do you think I am?! I'm Alzoru Ledura, the Coral Lindworm!

"Giving me the first move is your first mistake." Lucifer lobbed the blasts at Myltinta before rushing at her, aiming to deliver a kick to her gut.

She wobbled about as if made of jelly, dodging most of the blasts... but not the kick, oddly enough. No, she caught that in one of her many mouths to bite it. She then tried to punch him in the face, clearly not taking him seriously yet.
From the the Sevaza System, Planet Nafine! Just who the heck do you think I am?! I'm Alzoru Ledura, the Coral Lindworm!

"Hah! The false God puts up a better fight than you. So does my daughter, as a matter of fact.." He charged an energy blast between his hands, the energy starting to build up within Mylinta's arm.

"Aww, are you sharing Energy with meeee? How cute!" She taunted, using her mouth-tipped tendrils to bite into his arm... then she summoned another obsidian sword, hoping to impale his arm on it. "I wonder which sin you hold the most of...? Not Sloth, that's for sure. You're too energetic and well groomed to be sloth. You don't seem particularly envious, but..." She opened of her other mouths, which quickly gathered water.
From the the Sevaza System, Planet Nafine! Just who the heck do you think I am?! I'm Alzoru Ledura, the Coral Lindworm!

"Think of the consequences of what you're doing..." Lucifer spoke softly before detonating the demonic energy in Mylinta's arm. "I'm not even using my full power yet!"

"Gah!" Her arm was now in several pieces. "Owwwww that hurt... I may have to step up my game!" She then unleashed her Envious Tide attack from one of her mouths. This would hurt like shit... if it hit, that is. As for the blade, it ending up missing his arm due to her lost concentration, and her four tendril mouths let go of his arm by this point.
From the the Sevaza System, Planet Nafine! Just who the heck do you think I am?! I'm Alzoru Ledura, the Coral Lindworm!

Lucifer kicked away from the blast, narrowly missing the blast. There was no way he would pull that same stunt again..

"So you're stronger than I thought." He said. "Well then, let's take this battle up a notch!" A sword appeared in between his hands and he grabbed it, the sword emitting massive amounts of power. "Can you handle the sword that has killed gods?" He shot an energy blast at Mylinta before rushing at her again, suddenly disappearing and reappearing behind her. He aimed for her tendrils as he slashed.