Planning and preview thread is here!

Premise: The war is over, and Unicron is defeated. Autobots, Decepticons and neutrals are now working hand in hand to rebuild their home planet after the battle against Unicron. In trying to restore tradition and bring Cybertron to its golden age glory, Rodimus leads a rag-tag team on a search for the legendary Knights of Cybertron, following an incident that led to a discovery of an ancient map hidden within the Matrix of Leadership. Following him -- to the surprise of many -- as co-captain is Megatron, ex-Decepticon leader seeking to find atonement and inner peace for himself.

Their search brings them nowhere after three years. But they've returned on news that Optimus Prime had passed, on following assassination from a mysterious enemy. They've returned, too, because they say the prophecy is coming true.

The prophecy says the era of the Primes are almost over and only one Prime will be left to lead them to glory.

And Optimus had named Rodimus as the Last Prime.

Note: You do not need to have prior information and knowledge of Transformers or the More Than Meets the Eye comics to play.  The Transformers Wiki is available if you wish to know more about any characters!

Character:
Origins: (optional)
Faction: Autobot/Decepticon/Neutral/Colonist (delete what doesn't apply)
Biography: (a brief one is necessary; you can always get more detailed later on)
Gender:
Outlier: Yes/No (delete what doesn't apply)
If outlier: state ability:
Primary Weapon:
Secondary Weapon:
Personality:
Appearance:
Alt mode: (applicable only if your character is an OC)

Note: if you choose to state where your character comes from, please check first if their origins are already stated --- some canon characters have their origins stated in canon (i.e. Optimus and Bumblebee are from Iacon, Rodimus is from Nyon, Skids is from Nova Cronum, Cyclonus is from Tetrahex, etc). Some, however, don't. If you want to go ahead, here's a list of all listed locations on Cybertron.

ADMINISTRATOR
Character: Sideways
Origins: (optional)
Faction: Neutral
Biography: Sideways doesn't seem to care much about either side and plays whatever that will benefit him in a long run.
Gender: Male
Outlier: Yes
If outlier: Self-healing
Primary Weapon: Energy Cannon
Secondary Weapon: Light-up rear wheel Suspension/Buzzsaw weapon
Personality: He's cunning, blunt and doesn't concern himself with the feelings of other, stating them as "useless" when it comes to get the grand prize.
Appearance: 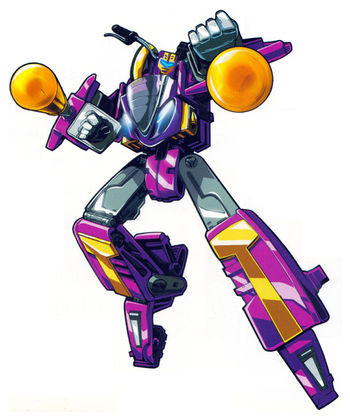