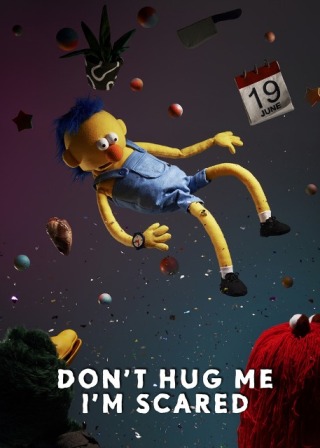 "Come on guys, let's get creative!" ​
Their most well known and successful project is Don't Hug Me I'm Scared. Beginning as a one-off short film in 2011, the series was crowdfunded and turned into a six-episode miniseries in 2014. The series lampoons children's television shows like Sesame Street by juxtaposing puppets and songs against unsettling imagery and existential horror. Each episode stars a trio of nameless puppets who encounter a "teacher": an anthropomorphic object or animal who tries to teach them about one of the "six subjects of life" through a musical number. The songs start off chipper and happy, but things inevitably take a turn for the worse... and usually culminate in a "lesson" the puppets aren't going to forget anytime soon.


[video=youtube]​
Don't Hug Me I'm Scared​
What do you think about the message of these videos? Why are your overall thoughts of the series? Express and show off your interpretation of the series. ​

Pure. Unadulterated. Horror. I'm just going to restate something from Gajin Goomba. To create fear, you must target the mind of a child. The amount of build up and just general unsettling I get from it, some children shows scare me, causes me to fear this stuff greatly.

"Let's all agree to never think creatively again."
"To the Ends of the Earth."

Personally I think the three of them were kidnapped and practically brainwashed. The 'teachers' all teach them to adhere to what they say and berate them and scold them if they deviate or think on their own.

It's expressed by the notebook when Yellow Guy begins to actually BE creative (i.e. dumpibg black ink on his clown painting, saying Green wasn't creative because it wasn't on the color wheel it showed them), The Clock shouting at Robin for beginning to question concepts of time and the like, silencing Yellow Guy's objections. Then the strange love cult that distorts the concept of Love and reality.

So I think Red is the only one so far to have 'broken' out. All three of them are shown to be missing on the poster in DHMIS 3. Robin is unknown but I'm sure he is dead. Yellow Guy is naive and easier to manipulate than the other 2, and Notebook silencing him keeps him from questioning things like the other two.

Since the calendars don't seem to chance, time probably loops or is done on purpose to keep them from realizing they're in an endless loop pf kidnapping.

Hey Loopy, you might want to take a look at this.

These videos are amazingly effed up.
From the the Sevaza System, Planet Nafine! Just who the heck do you think I am?! I'm Alzoru Ledura, the Coral Lindworm!

Uhh..... err... to be honest, I don't like this. It freaks me out. And it sounds a little boring and un-enthusiastic and just creepy. I think the whole part about being creative is good and in that prospect is sending a good message, but it is just done the wrong way.... *gets the shivers*