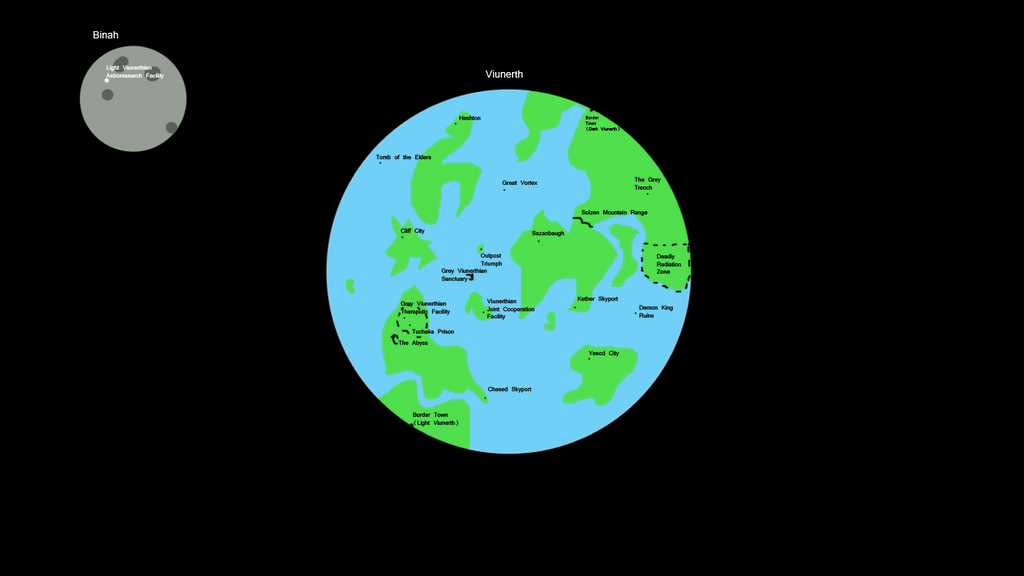 Viunerth is home to the Viunerthians, who split into two groups, Light and Dark. Light Viunerthians take on Angelic properties, while Dark Viunerthians take on a more demonic form. The planet had been in a state of civil war for several millennium, of which it had only recently ended. However, even today small skirmishes between the two groups are common. Travelers are advised to watch out for said skirmishes and to avoid them when possible.

The planet itself reflects the properties of light and dark, with the western hemisphere always being clear and warm while the eastern hemisphere is always cloudy, stormy and cold. There is, however, a "gray" area, where both Dark and Light Viunerthians live. This area, however, is the "hottest" area in terms of conflict, with fights occurring almost hourly.

A strange looking space shuttle landed on the surface of Viunerth, the entrance opening and extending a ramp.

"So this is Viunerth? Maybe I'll get my hands on some goodies and cause some trouble, eheheh!" From within it stepped out a rather strange looking humanoid. Her skin was pitch black, but brightly colored stitches liked different parts of her body.

"A weird lookin planet though."

Nearby, the sounds of clashing could be heard, a typical occurrence on the planet.

"Get off our land, you damn light-head!" A Dark Viunerthian yelled to the Light Vieunerthian he was clashing with.

"Yeah, yeah. How about you just die for killing several innocents? Then I'll leave." The female Light Viunerthian responded. "It's adorable, however, that you think you can even fathom being on my level of power. Do you even know who I am?"

"Does it even matter? I view all you Light Viunerthians the same, as pests that need to be exterminated from this planet!" The Dark Viunerthian backed off from the clash, preparing some sort of giant blast. "If I can't kill you with my sword, then I'll just vaporize you entirely!" He laughed as he threw the ball at the Light Viunerthian, who was standing firm. "What, you aren't going to dodge? You must really feel like dying today, then!" However, the Dark Viunerthian's expression changed to a horrified one when the "Light Viunerthian" cut clean through the blast, a dark energy formed around her sword.

"You seem confident, I'll give you that much credit. However," The Grey Viunerthian approached the Dark Viunerthian at high speeds, clashing their swords together once again, "you don't seem to realize that I am the legendary Grey Viunerthian who is renown as the legendary 'Dark Viunerthian Exterminator', Maki Tamazaki." Maki's sword then sliced clean through the Dark Viunerthian's sword, cleaving the man right in half. "And for that reason, you, today, had lost your only chance at surviving this encounter." She flicked the blood off her sword before unsheathing it, sighing. The tips of her hair had turned black, stained from the demonic energy she had used.

"Aggressive inhabitants I see." The strange being said to herself, although their mouth wasn't moving; just frozen in a twisted shark-toothed grin. "My kind of planet~!" She held up her wrist with a watch gadget on it, pressing it to type some kind of unintelligible language on a hologram screen before the shuttle closed its entrances and entered a lock-mode.

Maki turned around, looking right at the stranger. She flew in her direction, ready to draw her  sword.

"Hey, you! You don't look like you're here to trade, so may I inquire as to why you are here? To make matters worse, you've landed in Dark Viunerthian territory. They don't take kindly to strangers."

"I am not required to inform you of my objective for being on this planet." The strange being replied casually, her grin remaining on her face. "But I would rather not have my stitches come off by your hand, so I suppose I can specify~" The bright colors of the 'stitches' contrasted her pitch black skin.

"I am simply here to analyze and write data about this planet, for occupational reasons. Otherwise, I would like to see if there are valuables I may take back with me! Though perhaps I should not have told you that last bit." She kept her odd-looking eyes trained on a secondary holographic screen, tapping on various things without paying much direct contact to the woman.

"Though I care little about the welcoming committee here. I visit many planets with dangers."

"Alright.. I honestly couldn't care if you take 'valuables' from the Dark Viunerthians, but don't let me catch you stealing from us. The consequences for doing such a thing appear to be something you don't personally desire. A word of advice, however. If you do decide to steal from the Dark Viunerthians, just be aware that their punishment is... how do I word it... A bit worse than death." Maki flew up in the air, passing over the ship. "But seriously, don't let me catch you stealing from the Light Viunerthians if you don't want to end up like the last guy I fought, who I'm sure you saw before and after his demise..." With her warning set clearly and in stone, she flew away.