In the year 2050,  The Trabeafera Corporation working for the government had been doing experiments on human. They had invented a way to combine animal and human DNA, giving their test subjects the ability to shapeshift into animals. While most of the experiments resulted in deformities or deaths, there were some successful ones. These Shapeshifters would then be taken to a training facility to be molded into weapons for the government. They would be assigned on assassination, spying, stealing missions or into war zones. The explosive device implanted into their neck would make them think twice about escaping. However, some are more determined than most.

We will start with the characters meeting each other for the next mission. We have yet to want to escape from the organization. That will be for another Arc. For now, we’ll just go on missions and get to know one another.

There will be times when you or your team has to make decisions based on the options given by me. The decision will affect your squad members (injuries or death included), the upcoming events and the overall outcome of your mission. You guys can either vote or have your leader choose. I, of course, cannot choose since I’m the GM.


1/ An average person can have about 2 – 3 shifting forms. Only those who are exceptionally strong in both mental and physical can get past 3, because the chance of success is slimmer each new form acquired.

2/ Newbies only have one animal form. They can get more when they are experienced enough. Juniors usually have two. Seniors and Commanders often have 4-5 forms.

3/ Shifting from one animal to the next is rarely successful and the shifter is more likely to end up with deformity.

4/ The longer one stays in animal form, the more their sanity fades. Say, staying for longer than a day will cause them to lose control of their mind and go insane.

5/ They have special designed suits that can also merge with their DNA, thus disappearing when they shift and reappear when they are in human form.

6/ The lab is in Montana Zoo. The Military Base/Training Facility is in Glacier National Park, highly secured from tourists.

7/ The Collar is actually the name of a device implanted into a shifter's neck and can stretch or shrink depending on the animal they changes to. When in animal form, it will transmit their thoughts to their teammates as a form of artificial telepathy. The Collar has a built in explosive and electric shock so the cooperation can control violent test subjects or dispose of rebels. The collar also record all the things they say to help the government monitor them.

8/ The USA is the only country that managed to perfect the shapeshifting. Other countries had attempted but so far their men are only able to turn into some humanoid version of the creature. (Think The Lizard from Spiderman)

9/ Test subjects for shapeshifting experiments are mostly teen, illegal immigrants and convicted criminals. Just a suggestion to how you can build your characters.

10/ There are 3 main divisions (air, land,water). Each division has 6 squads, each is led by 1 commander. There are 10-20 members each squads but the commanders will only pick the enough amount for a mission. So, those who are available can be borrowed by other commanders or go on other duo missions.

11/ Changing from animal to human and vice versa can heal whatever wounds the person has (even poison). The reason for this is because the DNA is pure and undamaged like their physical body (if you had read Animorphs it's easier to understand). However, shifting too many times will exhaust them quickly. Also, shifting won't heal a defect the person was born with.
Images for reference: 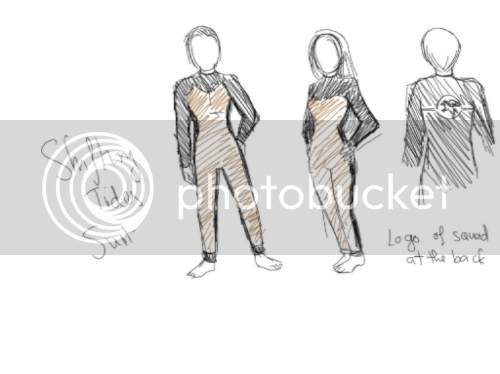 Other
These squads are like only formed when needed to and aren’t on the main list of the facility. Often contain less than 10 and the leader is appointed by the Alpha or voted between them, depending on the seriousness of the mission
- Crystalwings: Insect based - Stealth
- Apophis: Venomous - Stealth/Assasination
- Yeti: Arctic/Cold area (On land)
- Tizheruk: Arctic/Cold area (water)
- Sphinx: Desert missions

These characters are free for adoption. You can make a registration for them and I'll see if you can take the character/role.

The Alpha: One of the oldest shapeshifters in the facility. He is in-charge of all the other shifters. Little is known about him but it is rumored he has at least seven shifting forms.

The Operators: Those who communicate with the teams during mission and such

ADDED SOME MAJOR UPDATES
If anyone's thinking of joining or working on a character, I added a few things to the character template and added new info regarding the squads and such.​

I have a question! What's the difference between Animal form and shifting form? is that just the extent of the animal the person can shift to?

Animal forms are the animals your characters can turn into.

And Shifting form is same as Animal form, just different wordings so I don't repeat the same word too many times.