Welcome To Nafine, land of sapient dragons and a wide variety of other strange and wonderful beasts not seen on Earth or any other place for that matter! It’s a vast and amazing place full of adventures, though early on it would mainly take place on Wivetana, the big continent in the West there- Yes, the one with the huge jungle and desert, that one. What sets this game apart from other RPGs is the mechanics, and the strange and wonderful creatures found within our bestiary. From the giant city-eating Mamariba and Goddess of Destruction (Mylinata), to larval insectoids and Other small but deadly foes, and of course… DRAGON PEOPLE!

That’s the main draw- the Dragonfolk, or Durakuni as they call themselves. There are five common races, two rare races, and two Mythical races of Durakuni, and you can learn all about them, their strengths, and their weaknesses riiiight here in this book. As an added bonus, there’s a lot of potential for really silly adventures in this game- there’s a sort of playful love and care that I’ve woven into basically everything in this game. There’s humor to be found everywhere if you know where to look, and that’s how I DM as well- With a certain playful love.

That said, there’s plenty here for you “hard core” folks as well. Like I said, city eating monsters and gods, not to mention demons, angels, and you guessed it- dragons. If you’re still wondering why you should play this and not another better known tabletop game, well why not play and see for yourself? The game’s a lot more fun to play than to hear about! And on the off chance you happen to be playing with me, you can be sure that I’ll set up the atmosphere quite well.
~ Alzoru

From your childhood, you may remember your days playing pretend with friends and/or with toys. You might have even tied on a towel or the like and pretended it was a cape, while waving around a stick or toy sword to vanquish imagined monsters. Fundamentally speaking, a tabletop roleplaying game follows a similar spirit. It is essentially a collaborative game of “let’s pretend”, though a tabletop RPG is a somewhat more formal affair.

Firstly, rather than being played out with toy swords and the like, a tabletop RPG is played while sitting at a table, narrating the actions of your character rather than acting them out. These characters have well-defined capabilities and use these abilities to overcome foes or other obstacles. If the outcome of something the character does is uncertain, a dice roll is used to determine success or failure.

While most people at the table have a single character whose actions they control, there is one person, the gamemaster (GM), who instead controls the world around the players, along with the people in it (aside from the players’ characters themselves, of course). Though the GM almost universally controls all of the enemies the party fights, it is important to know that the end goal of a good GM is to create a fun adventure that the party will enjoy, not to try to best the party. The GM is simultaneously a game designer, a referee (rules disputes fall upon the GM to settle), an organizer, and a storyteller, though the storytelling is of a different sort than in a book or the like (see the Gamemaster’s Section for more details).

Though this is more of a continuum than a strict categorization, there are two rough game types. One is a game type often referred to as “Kick the Door Down” or “Hack-and-Slash”. In this game type, roleplaying is mostly ignored in favor of interesting and challenging battles. Such is essentially the equivalent of a traditional roguelike or hack-and-slash video game. The other type of game involves more focus on roleplaying, with combat generally taking a secondary role. Some games may even make combat exceedingly rare or eschew combat altogether. Of course, there is no single best approach. The group should consider getting together to discuss what to focus on before play.
~ Joat

I'm not actually sure what this campaign will be about, but I have a few ideas that I really want to to do! So, I'll let you guys pick the most fun sounding general plot

1. In the near future, a group of friends Go dimension-hopping in order to try and find a perfect world when Earth and Nafine are both torn by wars and prejudice. Will require at least one Inventor and at least one magic user. The main focus of this RP will be the various strange and wonderful places they find in search of Utopia.

2. In the near future on Earth, the United States has become divided so heavily by politics and corruption that the nation has crumbled into five smaller ones. The southern states have become a hyper-conservative theocracy where Witch trials have become common again, The west coast has become a communist dictatorship that pretends to care about freedom and liberty while casually brainwashing its kids and workers to be complacent slaves for the state. The East Coast, particularly the New England states have kept the name of the united states and its Republic government, trying to stay true to the original American Dream and its ideals. The great Lake states have become a tribal-style true democracy where the people settle into their communities and vote on actions to take, being extremely civil. The remaining states in the center and especially the rocky mountain areas are a lawless expanse of anarchy where people simply try to survive and generally care little for other people. This could get extremely depressing and admittedly pretentious.

3. Iron Age, Nafine. After hundreds of years of peace, the city of Megisthel is under siege from another city, but the real problem has only just begun. After nearly a thousand years without one, a new Grand Lich has arrived, and if not stopped will surely consume the world in its mad embrace of undeath and rot. But who can stop this creature that surpasses some lesser gods in power?

4. Suggestions from you guys. I am no perfect Game Master. I am willing to take suggestions, and I know you guys have got serious creative powers.

Truth be told, I'm an incredibly chill DM and while I would prefer you use one of the canon races, I will allow you to make one if you can balance it well and give it interesting lore. Same goes with classes. Speaking of races, they can be separated into the following categories: Humans, Humanlike, Dragonkind, Saurians(Dinosaurs), Angels, Demons, Beastfolk, and Strange/Mythical.

In the human category we have Humans, Neanderthals, and the 8 or 9 types of Dragonborn. Humanlike Contains Elves, Dwarves, the Slyke, Merixi, and the Uunidians who definitely aren't safe for work. In the Dragonkind category we have the main Draconic races of Nafine AKA my babies. Saurians are anthro dinosaurs and are thusly cool as hekk, moving on. Beastfolk contain Crocks, Bovines, Squid peeps, Kitsune, Lobstermen, Kobolds, Axolotls, and the Falcori. Angels and Demons are celestial beings that rarely show on the mortal plane. They are not quite like the biblical sort either as demons aren't inherently evil and in fact exist to punish evildoers while angels reward the righteous (or kill demons who do turn evil if necessary.) There is a type of demon for each deadly sin, and an angel type for each cardinal virtue. Lastly... The weird ones. The Cambrianites are technically also a type of beastfolk, but they are so rare and so bizarre that they warrant placement here- they are a collection of anthro Cambrian era animals that were brought into being by evil druids. Next is the Nemani, technically a type of dragonkind. They are a mythical race who are supposed to live underground and are seen as a boogeyman of sorts for the Munitara (Drakes) of Wekasi. The Mecha race is an artificial one. They are machines who gained spaience one way or another. Kandites are artificial candy constructs given life by some peculiar magic. And then there's the Zelvae, which are weirdly cute little disc-mosquito aliens.

This of course is a short hand explanation. You can ask me for more info at any time. Now onto classes! Classes are basically your job in the world. That's it really. Each class has a unique or nearly unique ability to help them stand out. There are classes for every time period as well such as the hunter, witch, shaman, barbarian, craftsman, and bandit in the prehistoric era! And many classes can still be played even outside their home era. For advice on what class to play, you may consult your game master (Me!)

While it may look big and intimidating, Alzoru/the GM will be happy to help and will likely have to stats shown are default stats before modifications/

I think that's all the major important info??? If you need further help, ask away here or on Discord.
From the the Sevaza System, Planet Nafine! Just who the heck do you think I am?! I'm Alzoru Ledura, the Coral Lindworm!

I would love to know more about ur world you've created. Whats it like? whats the geography like? culture? and stuff like that. I love that sort of world building when pepole make their homebrew wolrds 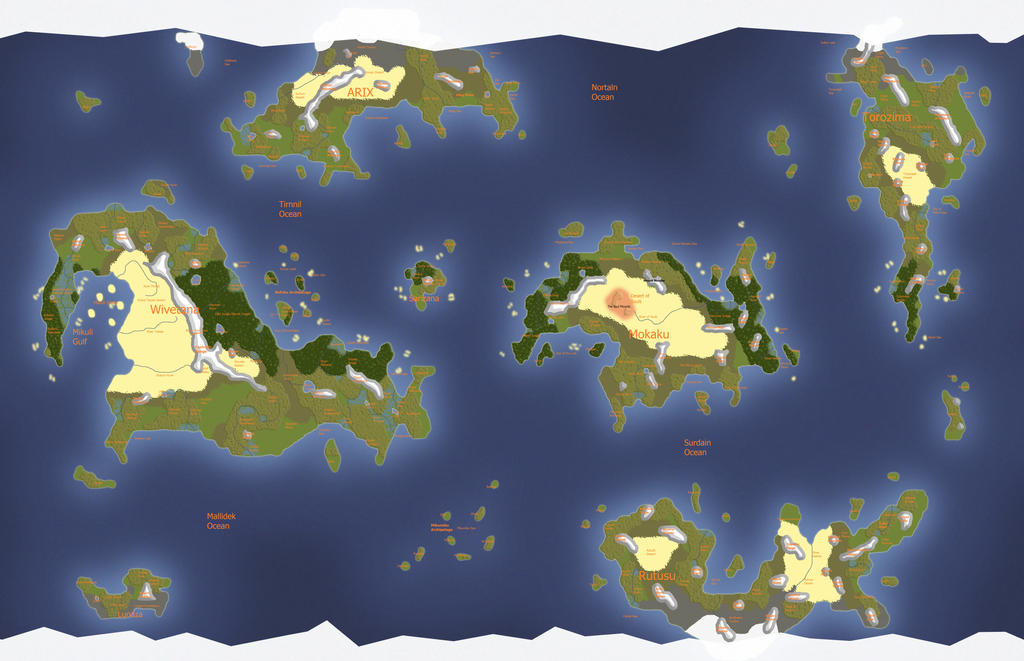 Behold the map. We'd be here all day if I spoke at length about lore and cultures. Heck, I'm writing a whole lore book right now!

But to make long stories short

The dergs are very varied and live vastly different lives from sea serpents that build homes partially or fully submerged to feathered serpents who build communities in trees leaving only their temples and some food storage on the ground, to barbaric warriors who pillage and kill for their own sick pleasure, to peace-loving drakes who live under what is basically communism gone right.

And that's just a few of the dragonfolk.
From the the Sevaza System, Planet Nafine! Just who the heck do you think I am?! I'm Alzoru Ledura, the Coral Lindworm!

thats awesome! Your world looks so huge and ripe with stuff to explore. I bet readers of yuore story would get lost for hours inside it. I'd love to buy it if you ever release it!

I have!
https://www.rpgnow.com/product/268877/Nafinian-Nexus 1.9 version for sale. 1.10 coming soon.
From the the Sevaza System, Planet Nafine! Just who the heck do you think I am?! I'm Alzoru Ledura, the Coral Lindworm!