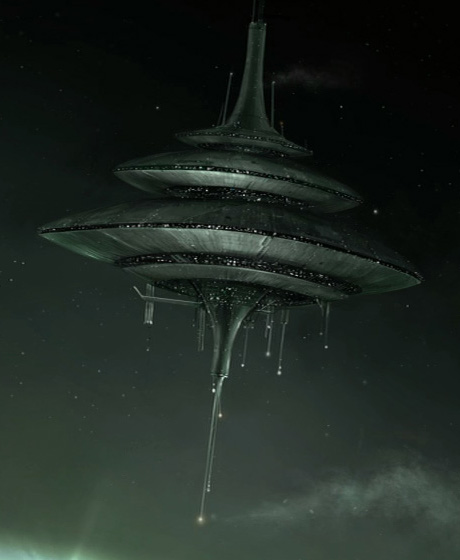 Floating in an orbit around Planet Booga and avoiding the moon is the Haz Corp "Celestial Peacekeeper Station," abbreviated in company memos to the CPS, and more informally known as the Orbital Weapons Production Facility to everyone else. The facility is used for the production of guns, blades, knives, bombs, and even vehicles, all mass produced and prepared to be shot down onto the planet through drop pods, thus incurring a significant price increase compared to equivalent goods. The station's magnetic drop pod deliveries only occur in certain areas at certain times due to the orbit, something many investors lament. Regardless the deliveries are consistent and stable according to the timetables provided by Haz Corp, and can be relied on to supply public or private armed forces.

Haz Corp is a small scale private weapon supplying company on Booga that after it was evicted from their previous underground facility set up the orbital one, utilizing a small unmanned probe and portal device to construct it in the vacuum of outer space. This was done to avoid having to compete and pay for land, but also to avoid any gun regulations that could be imposed as they are in space and thus not part of a country. The facility is fed and maintained through a series of portal network devices in particular locations, private offices near Johannes Palace of Shina Ania, the Black Brotherhood and White Sisterhoods of Magic of Paradise Region, Cindy of Diemos Valley, Paris of the Desolate Lands (to the annoyance of the Meeting of the Dark who lack the direct control to oust them), and the Big Apple in Empire State. The materials required for weapon production are mined and shipped directly to the facility through portals used by the head foremen of Haz Corp, each one granted a portal network device and considered among the highest of responsibilities in the company.

The company sells three different variants of goods: the Freedom Swarm line being mostly reliable low grade weaponry suited for mass swaths of barely trained soldiers, the Republic's Grand line being suited for smaller divisions of well trained units deserving better equipment being composed of not only better materials but having a few upgrades such as secondary tactical components or increased comfort of use, and the Infinity One line suited being mass produced high quality arms and vehicles that is intended for elite and very well paid soldiers who need gear that is not only created of high quality materials but also possessed numerous secondary upgrades and comfort additions.


Each line has their own variant of the following goods list, thus a general order is composed of the number designation for desired quality, the letter for good type, and how many batches units of said good. Rather notably, the company does not produce aquatic vehicles, citing size concerns for delivery.