DBZ: Anomalous Past for the Future [REGISTRATION]

The events of this roleplay take place after A Demon's Demons and Shadow of Revan.

Summary: Peace was never meant to last within Brachi's universe, no matter how much they wanted it to happen. What was thought to be a well-earned vacation, turned into nothing short of hell, all because of enemies from the past. After taking care of skirmishes within the technological planet known as Deliani and emerging victorious from fierce battles on the more hospitable planet known as Savara, the fight was taken to the enemy on Gyges, a planet which consisted entirely of organic matter. However, it was there that the battle took a dark turn. Although the enemy forces were stopped, a chain-reaction was inadvertedly triggered which obliterated the entire planet and Brachi and all of her closest family, friends and allies went missing right as the planet exploded. With no resident ki-signatures or physical traces remaining, the entire group was believed to have been killed when the planet was destroyed. But when Shenron reveals that they are no longer among the universe itself, the search for their bodies begins, visiting those planets the group had been helping out before disaster on Gyges. The whole situation escalates when then the remaining group, led by Future Brachi and Future Xenest, are forced to make a trip into the LAST places they wanted to visit... the Anomaly...

You can register your characters here if you want to participate.

Please note that the characters listed here are the CONFIRMED Characters and will get updated as story development progresses. When registering, please tell me whether your character is a Hero, Neutral or Villain.

I'll register my new OCS, Maki Tamazaki and Oralie Vincent, as heroes and Lucifer as a villain.

I'd like to use my OC Atama. If you need me to type it out just send me a Skype message.
"To the Ends of the Earth."

Hey ZF, since I'm back mind if I reintroduce Atama with a new ally?

Although with different abilities.
"To the Ends of the Earth."

I'd like to register Oriko and Yutsuko as heroes and Hunhow, Sentient Destroyer of Worlds, as a villain (a mysterious character... Or is he? Heheh.) 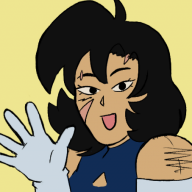 I would like to register Panich and Zibarica as a hero
And my two other ocs God of Sleep Jum Sum and Illuac as neutral if thats alright!

And also is there any way I could be Piccolo?